Read an Excerpt from Chase My Heart -- #99cents limited time! 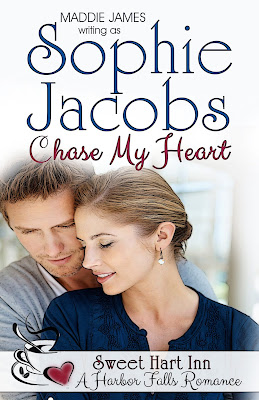 From Chapter One of Chase My Heart by Sophie Jacobs


“There he is again.”
Sydney Hart jerked her head up, bonking her forehead on the top of the display case where she had just placed a fresh tray of scones. “What? Ouch! Where?” She rubbed her head and looked to where her cousin, Suzie Hart Matthews, pointed.
“Over there,” Suzie said. “On the bench across the street in front of the library. Your stalker.”
Sydney squinted, wiped her hands on her apron, and took a couple of steps toward the big picture window of her bakery. “Oh, Suzie, are you sure?”
“Dead positive. I remember his jacket.”
“Well, shoot.” Dammit.
Puzzled, Sydney blew a strand of hair out of her face and eyed the guy. “I thought maybe he was gone. I really didn’t believe he was stalking me anyway. I mean, Shelley gets riled up about stuff like that, but you are always so levelheaded, Suzie, which has me a bit worried. And you know me, I don’t pay a bit of attention to anything other than what’s happening straightaway in front of me. So, what do we do now?”
Suzie picked up her cell. “Time to call in the local forces.”
Grasping her wrist, she said, “I don’t think that is necessary.”
A brow arched above Suzie’s right eye. “Syd, listen to me. Let me give Matt a call. He can advise.”
“Suzie, Matt is about as effective as Barney Fife. I mean, I love him, seeing that he’s Shelley’s husband and your brother-in-law and my cousin-by-marriage and all, but nothing big ever happens here in Harbor Falls, and I’m suspecting nothing big is going to happen with this guy, either. Let Matt be. We don’t need to involve any of Harbor Falls’ finest.”
She tried like hell not to look out the window again. “Besides, I don’t have a stalker. I think he just likes pastries.”

PREVIEW MORE BY CLICKING BELOW. ENJOY!