Trust Me: From bounty hunter to protector

on March 16, 2020
Several years ago, I read an article in the newspaper that said in a few generations, blue eyes would no longer exist. This was due largely to the dominance of other eye colors and the blending of races over time. That thought intrigued me and a story began formulating in my head.

What would happen if there was only one blue-eyed woman left? Trust Me became that story. 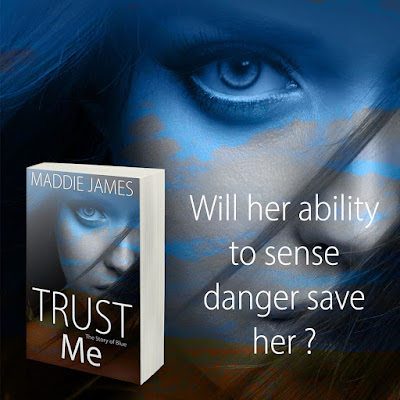 For years he sought her for the bounty on her head. Now, he is her protector.

The year is 2095. The Americas Revolution has ended. And Cyan Sebastian—the last blue-eyed, Caucasian woman known to exist in the Western hemisphere—is on the run. Her safe and sequestered life ripped apart, she is running with a man who has sworn to protect her. A man who once hunted her for the bounty on her head. The man, whom days before, killed her father.

Devin McCrae is that man. Having tracked Cyan and her family for years, Devin never dreamed her father will one day drop her in his lap with a proposition he could not refuse. He never imagined that instead of hunting Cyan for the bounty she would fetch, he would become her protector to the end, and safeguard her from all the others.

Most of all, he doesn't expect he will fall for her. If ever there was a woman who is hands off—Cyan Sebastian is that woman. Turns out though, keeping her hands off him, is the bigger problem. And it’s a deadly one, at that.

With the ability to sense when danger is coming near, Cyan has to learn to trust the one man she's feared for her entire life. Can the psychic powers she inherited from her mother be her only salvation?

Trust Me is ON SALE now for $0.99 at Sand Dune Books. You can also get it for the regular price at these retailers.