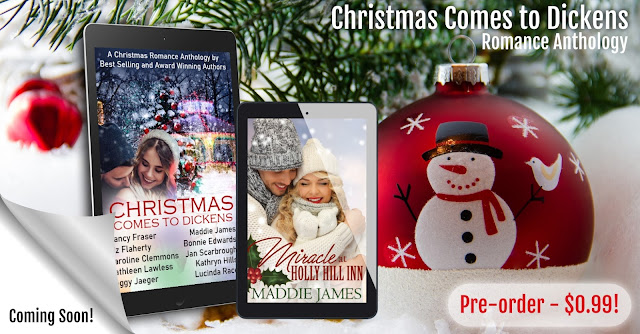 Hey! I know we are in the season of spooky things and such but lately I've been thinking about Christmas. I have a brand new story coming out in the Christmas Comes to Dickens Romance Anthology to be released later this month.

I'm thrilled to be part of this project and with 9 more fabulous romance authors--each and every one whose stories I adore.

But let's talk about Dickens....

Dickens is a quaint New England town bustling with excitement and anticipation for the upcoming Christmas holiday. We have the annual tree lighting in the town square, a snowman building competition, ice skating on Grosvenor’s Pond, and horse-drawn sleigh rides. You’re welcome to cut down your own Christmas tree at Gridley Meadows, or join in the caroling on the Common.

Dickens offers an abundance of heartfelt wishes, a few much needed miracles, and—quite possibly—a touch of magic! Families reunite, new friends are made, and old flames take a second chance at happiness. All while celebrating this most joyful time of the year.

How about a peek into my story? 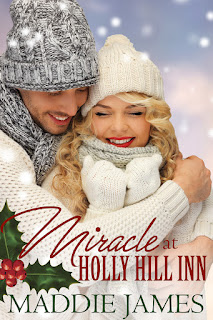 Sometimes all we need is to believe.
Ariana Angelo’s blog specializes in “all things Christmas, all year long.” While traveling New England in search of the perfect Christmas village, she lands in Dickens amid the town’s Christmas festivities—and a snowstorm. She’s delighted and giddy with holiday cheer and can literally feel the magic of the season in her bones.

Matt Matthews—owner of the century-old Dickens Hardware—dislikes the season, despite all the Christmastime holiday hoopla. He’s all about regular business, not a holiday ornament or tree trimming bauble to be found in his store. The holiday triggers unwanted memories, so he avoids the festivities—and the people—as much as possible.

While she set out to find the perfect Christmas village, Ariana instead finds the town Scrooge. Will two days snowbound together at the historic Holly Hill Inn bring them closer together on their holiday differences, or send them each on their merry way?

When Ariana arrives in Dickens....

Even the trees sparkle.

Ariana Angelo pushed open her car door and stepped out onto snow-covered pavement. In awe, she scanned her surroundings to take in the quaint New England Main Street lined with Victorian shopfronts—each one decorated to storybook perfection with greenery and red bows, a hefty portion of tinsel and holly, and of course, snow.

The snow was real. None of that fake stuff like back home.

Closing the car door, she moved toward the sidewalk, twirling once, maybe twice, still perusing the most precious Christmas village scene she’d ever before encountered—and that was saying a lot. Christmas was her business, her world—and this town just might be Christmas perfection. She was so glad she’d come.

Stifling the urge to lift her face to the sky and catch a drifting fluffy snowflake on her tongue, she sighed with happiness, eager explore.

Down the street sat the gazebo. She recognized it from pictures she’d seen of the town. It, too, was draped in greenery and ribbons, looking somewhat like a confection sitting atop some sort of pretty Christmas cake—at least one she might bake. It appeared the gazebo was situated within the town square. Beside it was a statue sporting a red scarf, billowing in the brisk breeze. Stepping onto the snow-swept sidewalk, she kept an eye on the structure and wandered a few steps in that direction.

Off to the side of the gazebo stood the Christmas tree, proudly displaying gold and silver baubles, ornaments of all colors, and more ribbons—all peeking through fresh snow. The annual Dickens Christmas tree lighting was earlier in the month, and she was sorry she’d missed it—but there was no denying the tree’s magnificence.

And, oh? Is that a carousel?

Her insides twittered with glee, bubbling up so rapidly she could barely contain it. She might have let out a quick little giggle.

PREORDER YOUR COPY OF CHRISTMAS COMES TO DICKENS TODAY! 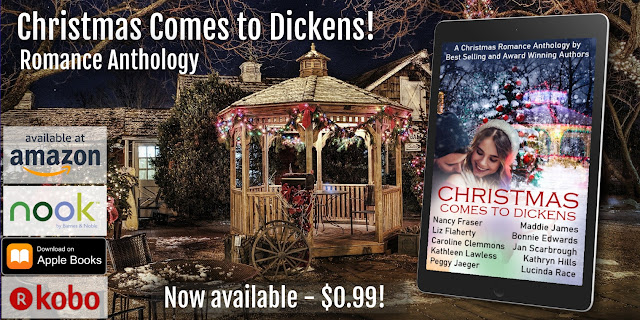