Welcome to Dickens—a quaint New England town bustling with excitement and anticipation for the upcoming Christmas holiday. Don’t forget the annual tree lighting in the town square or to sign yourself up for the snowman building competition. Afternoons are great for ice skating on Grosvenor’s Pond and the evenings are perfect for a horse-drawn sleigh ride. You’re welcome to cut down your own Christmas tree at Gridley Meadows or join in the caroling on the Common.

I’ve never been to New England, but fortunately, many of my co-authors for this anthology live there, and were able to provide some great inspiration. I had a picture in my head of an old Inn I wanted to include in the story, and I managed to find a few pictures to help me with my descriptions too. The Holly Hill Inn was born, and my story started coming together. I also wanted to play “just a bit” off a Charles Dickens theme, and I may or may not have succeeded. I’ll leave that up to you!

Sometimes all we need is to believe. 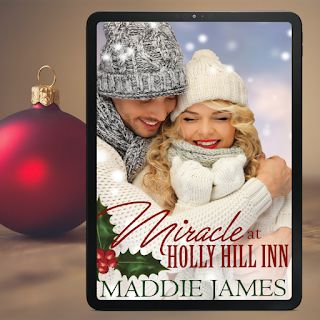 Ariana Angelo’s blog specializes in “all things Christmas, all year long.” While traveling New England searching for the perfect Christmas village, she lands in Dickens amid the town’s Christmas festivities. She’s delighted and giddy with holiday cheer and can literally feel the magic of the season in her bones.

Matt Matthews, owner of the century-old Dicken’s Hardware, despite all the Christmastime holiday hoopla, dislikes the season. He’s all about regular business—not a holiday ornament or tree trimming bauble to be found in his store. The holiday triggers unwanted memories, so he avoids the festivities—and the people—as much as possible.

Until one incredibly insistent tourist refuses to accept that he doesn’t believe….

The smell of baking gingerbread was even more overpowering in the kitchen than throughout the rest of the house. Ariana immediately began snapping pictures of Kat and Aimee as they baked. Aimee kneeled on a stool at the kitchen island—a pillow under her knees—rolling out gingerbread dough. She wore a too-big apron wrapped around her waist and tied in the front. She had flour smudges on her cheeks, dough on her fingers, and a smile on her face. Glancing up as Ariana aimed the camera her way, she smiled a big, toothless grin. Ariana snapped the picture.

“That one is awesome.” 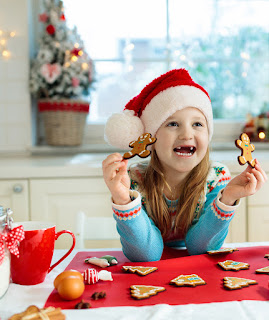 “I know. I could smell the ginger all over the house.” Ariana stepped closer to the island. “Are you tired?”

“She was a big help today,” Kat called out from across the room. She peeked into the oven. “Just a couple more minutes on this one. We’ll be finished soon.”

Ariana snapped another picture of Kat. Then, looking about, she noticed all the gingerbread layers cooling on racks. “Goodness. When did you say the gingerbread house assembly happens?”

“Tomorrow,” said Aimee. “We always do it on Christmas Eve. It’s—”

“Tradition.” All voices in the room chimed in at once. Including the male voice coming from the breakfast nook, which was decidedly the loudest.

He rose from the table, a sandwich plate in hand, and reached over to pinch Aimee’s nose. “And don’t you forget it, elf.”

“I’m not an elf.” Aimee giggled some more and batted at his hands. 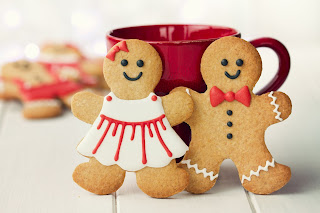 Ariana snapped a quick picture of the interaction between the two.

Matt turned to Ariana. “Sandwich fixings are on the table.” He dusted the crumbs off his plate into the garbage and stashed the plate in the dishwasher. “Still hungry?”

“Famished. Thanks.”
“No problem.” Brushing his hands together, he added, “I’ve got some things to take care of outside—looks like the snow has stopped for a while—I’ll be in the barn if either of you need me.”

Kat turned. “In the barn? Are the lights finished?”

Matt approached his sister and gave her a peck on the cheek. “Relax. All done, sis. And you can thank Ariana for the expertise. It’s going to look great tonight and I can’t wait for you to see it. However, we’re requesting no peeking until later. Okay? That includes both you and the elf.” He ticked his head toward Aimee.

“What?” He turned and swept Aimee off the chair and swung her around. “I’m sure your ears are pointed. Let me see.” Sitting her back down on the stool, he went about inspecting her ears. “Hm…” he said softly. “I was sure I saw points there last year. Maybe they don’t come until Christmas Eve.”

He shrugged. “Well, let’s wait and see tomorrow. I do think I see little ear buds starting to grow, though. You better go look in a mirror.”

“What?” A wide-eyed Aimee hopped off the bar stool and ran out of the room.

Kat wiped her hands on a dish towel, tossed a quick glance to Ariana, and then gave Matt a long, hard look. “Excuse me. Who are you and what have you done with my brother?”

Look for Christmas Comes to Dickens at your favorite ebook retailer!