Once upon a time there was a teacher, and one hot August summer, she and her teacher friend went off to a conference in the cool Colorado mountains. The conference was great--what they saw of it, anyway. The trail ride they skipped the afternoon sessions for was a lot more exciting.

You see, there were cowboys.

And this teacher, even though she'd not ridden a horse since she was a kid, made the commitment for a four-hour trail ride into the Colorado mountains--two hours up and two hours back. All was well heading up the mountainside, the scenery was great, the horse was a dream, the cowboys were... well, cowboys.

Coming down the mountain, however, was a different story. The teacher had a difficult time handling her horse on the downward slopes, crossing a little stream, and keeping up with the other horses. She mixed up her signals to her mount. When she thought she was telling the horse to slow down, she was really telling the horse to back up. Consequently, they lost their space in the horse line. So, the horse galloped. And the teacher held on for dear life. And when the teacher was finally finished with this nightmare, she could only think of one thing--

At least there were cowboys.

Now, this story does have a happily-ever-after ending. You see, the teacher turned her adventure into a book. The opening scene--probably elaborated upon a bit--mimicked the teacher's chaotic ride down the mountain. She sold that book--her first published novel--and then the teacher wasn't a teacher any longer. She was a romance author who wrote about cowboys (and other things).

True story. I swear. I have the book covers to prove it! The original book is on the left, the revised/rebranded and re-authored book, is on the right. What do you think of this updated version? 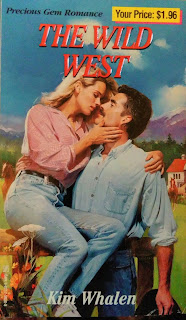 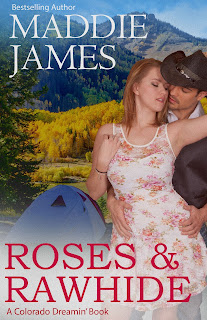 Now, twenty-some years later, the sequel to this first cowboy book, is finally written. And, I thought I'd retell that story here.

Readers have been asking for Mack and Jillie's story for years. Years! But other stories and different cowboys got in the way. Until now.

The Cowboy's Secret Baby released in August. If you've not grabbed yours yet--and you are ready for a bit of escape from Covid and cookie baking, check it out! There are days when you just need a cowboy....

She's the maid of honor. He's the best man. Both are keeping secrets. 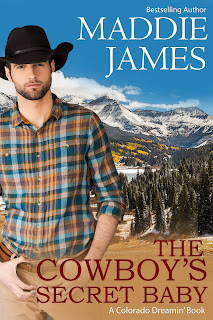 The long-requested sequel to Maddie James' first published novel, Roses & Rawhide is now available!
Readers wanted to know...
What happened to Jillie and Mack's relationship at the end of Roses & Rawhide?
Why did Jillie go back to Kentucky?
Will they get back together?
What's their story?

But when Kim and Thad host their wedding at Thad's Colorado ranch a few months later, Mack and Jillie must come face-to-face with reality--and with each other. She's the Maid of Honor. He's the Best Man. Both are harboring secrets--secrets that could break a potential future relationship if they both keep avoiding telling the truth.

Can they reveal those secrets to each other? And if so, can they get past the withheld truths to plan a future together? 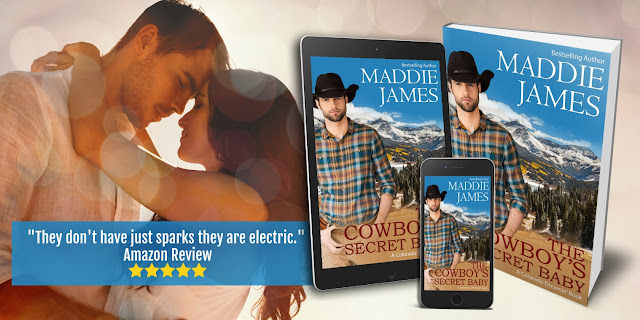