Release day is always an interesting day. It's exciting and anticlimactic at the same time. At least for me. I anticipate the hype, expect that I'll be busier than a one-armed paperhanger all day, and then end up with a sore trigger finger because all I've really done is click refresh on the sales data for most of the day.
Still, new releases are a bit like crack. As soon as one is finished, I can't wait for the next one.
Today, is Ethan MacKay's book birthday. He launches today, out into the world. I'm excited for you to meet him.
So, about Ethan? Here are a few important things:
In order to serve and protect--defend his country and do what he was trained to do--Ethan thought he had to give up some of the things most precious to him. Turns out, he was wrong. 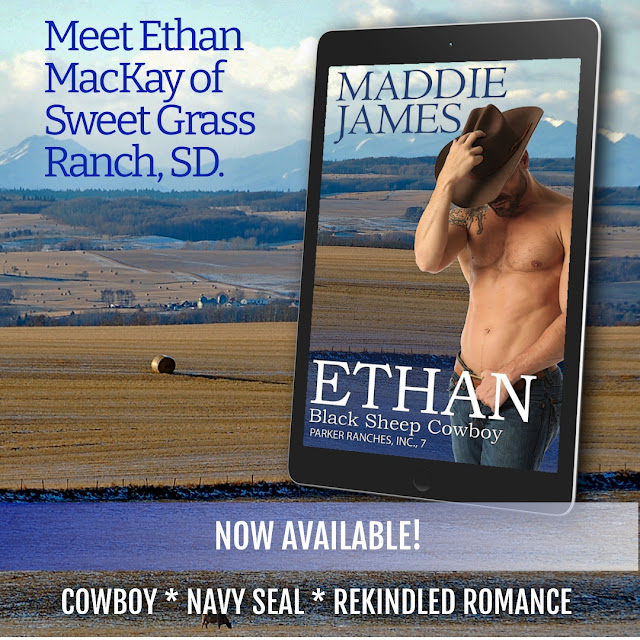 Navy SEAL Ethan MacKay returns to Sweet Grass Ranch to recuperate from an injury suffered on a mission, and eventually help manage the South Dakota family ranch with his identical twin brother, Evan. But he’s been gone too long, and he’s not the man who left the ranch over a dozen years ago. Not by a long shot. His body broken, and hopefully not his mind, he prays what they say is true—that cowboy runs deep in your blood—because this black sheep cowboy could sure use something familiar to hang his hat on.

But being back home at Sweet Grass is almost more of a challenge than heading up a special ops mission in Libya, especially when something familiar turns out to be the major challenge—his ex-wife, Brandley Mendoza.

Brandley and Ethan’s marriage quickly unraveled when he headed into SEAL training, and by the time of his first deployment, their relationship was fatally severed. Still, she keeps in close contact with the MacKays and considers them family. Hired by Ethan’s brother to review the ranch’s accounting books after their father’s death, Brandley soon discovers Evan has an ulterior motive. Why he thinks she is the person to help Ethan get his head back on straight, she doesn’t know, especially when she’s dealing with problems of her own—namely, her ex-husband, who is seeking full custody of their daughter.

But she risks coming down from her Black Hills safe haven to find out—only to realize that her heart is still vulnerable, and that Ethan isn’t the cowboy she fell in love with when they were kids.

Can Brandley tease out the cowboy in Ethan’s black sheep heart and rediscover the love they once shared? Can she resolve the issues of her own shaky past, to let herself trust again? Or are they both too far gone to even try?