I Do...Again? New from Nancy Fraser! Ready for the beach?

My good friend Nancy Fraser--who is a prolific author and has been writing her tail off lately--has a new release that I want to share with you. Are you ready for a beach book (or two?). 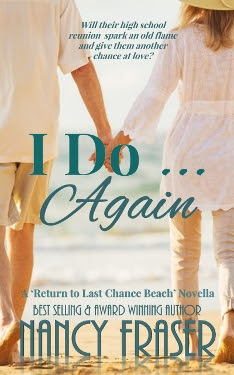 Can they re-ignite what they once had and take a last chance on love?
Thirty-five years earlier, Lily Abbott and Mitch Colby exchanged wedding vows in a quaint ceremony attended by a small crowd consisting of four Micronauts, a one-eyed pet rock, two special-edition Barbies, and an assortment of stuffed animals. Officiated by Stretch Armstrong, it was the social event of their 8th summer.

Lily never forgot the childhood ceremony. Or the fact her best friend and first love had left her behind and relocated to Boston to pursue an Ivy-League education. Now a divorcee, with college-bound twin daughters, Lily’s moved on and put the foolishness of first crushes and the childish dream of true love behind her.

At eighteen, Mitch had never wanted the expensive education his father mapped out for him. He’d have been perfectly happy to stay in Summerville, marry the love of his life, and settle down. However, when push came to shove, he’d not wanted to upset his ailing mother, and had left everything...and everyone...that he’d wanted behind.

The 25th reunion of the graduating class of Summerville High has brought Lily and Mitch back together at The Sands, a seaside resort on Last Chance Beach. Will one weekend together be enough? Or, is there a possibility for more?

Read an excerpt....
The soles of her sandals skittering across the wet surface, Lily Abbott landed on the weather-worn dock with a loud thump, her backside slapping against the damp slats in the same way a fish flops around on the ground after being pulled from the lake.

So much for a graceful entry.

She glanced from side-to-side, wondering if any of her former classmates had seen her awkward faux pas. Gracie Potts and Shep Warren stood off to the side, more engrossed in each other than those around them. Ellie Cabot was stoking the campfire, poking at it with angry jabs and then letting loose a string of curse words when the embers jabbed back.

At least half of the varsity football team were huddled around two well-stocked coolers, chugging beers and laughing about past victories.

Off in the distance, laughter, mixed with strains of Meatloaf’s I’d Do Anything for Love, floated across the warm night air from the hotel’s patio. Nostalgic music from their senior year...as if time could be turned back, memories either revived or erased.

Settling more comfortably on the edge of the dock, Lily removed her sandals, and dangled her legs over the side, her toes flirting with the water. Closing her eyes, she welcomed the breeze wafting across her face.

“So, this is where you’ve been hiding.”

Lily startled at the sound of the deep, male voice. She didn’t need to look to know who was speaking. The intervening years weren’t nearly long enough to wipe away the familiar sound.

“If you say so,” he countered, the sarcastic tone of his comeback sinking into her senses.

Mitch Colby. Her best friend, her first love, the one that got away. Or, more precisely, the one who left her behind.

“I didn’t expect to see you here,” she said truthfully.

Turning slightly and tilting her head, she met his gaze, then wished she hadn’t. He smiled down at her, his familiar smirk ratcheting up her heart rate. As her late Aunt Ethel had once observed, ‘The good Lord had surely taken his sweet time with Mitchell Colby’. Twenty-five years hadn’t altered Ethel’s keen observation one iota. He was still a breathtakingly handsome man.
p.s. Also watch for this new beach book from Nancy coming in July. Preorder now! Wherever books are sold.... 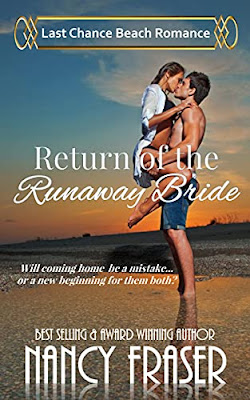 NANCY FRASER—Jumping Across Romance Genres with Gleeful Abandon—is an Amazon Top 100 and Award-Winning author who can’t seem to decide which romance genre suits her best. So, she writes them all.

Like most authors, Nancy began writing at an early age, usually on the walls and with crayons or, heaven forbid, permanent markers. Her love of writing often made her the English teacher’s pet which, of course, resulted in a whole lot of teasing. Still, it was worth it.

When not writing (which is almost never), Nancy dotes on her five wonderful grandchildren and looks forward to traveling and reading when time permits. Nancy lives in Atlantic Canada where she enjoys the relaxed pace and colorful people.