A Peek at Christmas -- Are you ready? 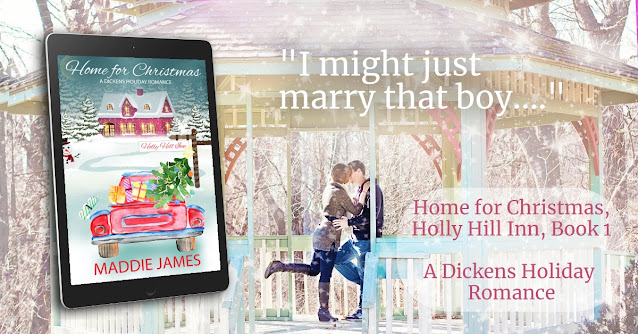 It's August. And today I'm gonna talk about a new Christmas book. Yeah. Christmas. And it's not even Christmas in July.

I guess it's Christmas in August.

Anyway... I have a new Chrismas series ready to launch on August 31, with book 1, Home for Christmas. This Holly Hill Inn series is part of the Dickens Romance books, published with several other romance authors. (more on those books later, too!)

In the meantime, how about a sneak peek at Home for Christmas? Here's the blurb, followed by an excerpt. Enjoy! 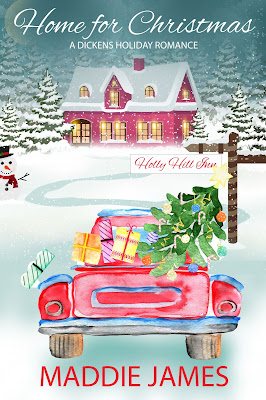 During the summer of 1989, Jenny Anderson meets Ben Matthews during a beach vacation with their families. Fresh out of high school and ready to get on with life—Jenny to Penn State in the fall and Ben to work for his uncle at Dickens Hardware—they didn’t expect to fall in love.

This long-distance relationship doesn’t deter them. After a summer of love letters and clandestine trips in the fall, Ben asks Jenny’s father for her hand in marriage over Thanksgiving weekend. Much to Jenny’s horror, her father angrily denies his request.

That’s when Ben and Jenny devise a plan to elope, enjoy a Christmas honeymoon on the New England coast, and settle into life in Dickens, the Christmas Village. Jenny hopes her parents will come around, finally give their blessing, and welcome Ben into the family.

But plans go awry when Ben’s truck breaks down not far out of Dickens. The young couple takes refuge from a fast-approaching snowstorm at an old farmhouse with elderly occupants. The pause in their getaway causes Jenny to have doubts—until she witnesses first-hand the power of love and the magic of Christmas.

A Christmas Romeo and Juliet story with a happily-ever-after ending.

Jenny Anderson shoved her backpack through her bedroom window and peered out over her parents’ front lawn. The bag was a lot fuller than she had anticipated, since she’d tucked a couple of Christmas gifts inside at the last minute—but she’d manage. The night was crisp, clear, with a near-full moon shining down from behind the house, casting shadows and dancing light across the neighborhood. The time was just after midnight. She’d waited for the old grandfather clock in their entryway to chime, then made her move.

She felt rather silly, sneaking out of the house. She was an adult, for goodness’ sake—nineteen-years-old. But here she was, sneaking all the same, and avoiding the inevitable confrontation with her parents.

In particular, her father.

The backpack tumbled and slid a few feet down the incline of the steep porch roof, making a snake trail in the skiff of snow on the shingles. One leg through the window, followed by the other, she sat on the edge and studied her surroundings, wondering how many of her neighbors had seen their Philadelphia neighborhood from this vantage point.

She didn’t worry about the house alarm. For some reason, the security lock on this window had never worked. She’d discovered that years ago, and of course, had not divulged that information to her parents. She’d snuck out often during her teen years. Tonight, it made her escape easier than walking out the front door, avoiding disarming the alarm and waking her parents.

It was a pretty view up here, she decided. Serene. She took a moment to gather into herself, knowing that this peaceful feeling might be her last one for a while—that is, until she and Ben got on their way, and she had a wedding ring on her finger. Until then, she’d likely be a nervous wreck.

But right now, sitting in the dark, high above everything but the treetops, she breathed in frosty air and welcomed the silence and the tranquility. Inhaling deep, she sighed, letting the breath out long and slow.

She’d like to freeze this moment in time—just for a few minutes. The previous few weeks had been too stressful with all the family drama. Up here, on the roof, things were simpler and just…well, nice.

Calm before the storm?

She didn’t want to consider another storm. She was ready for peace.

And she was ready for Ben.

The lights twinkled on the fresh-fallen snow, winking between the branches. The streetlights provided a soft, blueish glow to the tree-lined street. The colonial houses of her neighborhood were tastefully trimmed for the season, some with candles in the windows, others with wreaths on the door, spotlighted from beams shining up from the lawn. Christmas trees sparkled in the windows of a few dark houses. And to her left, her closest neighbors, the Garrison’s, went all out with a Santa and sleigh on their roof.

“Well, hello there, Santa,” she whispered. “Fancy meeting you up here.”

Scooting off the sill, she turned to gently lower the window. Simultaneously, her sock snagged at the ankle on a nail sticking out from the roof.

“Shoot,” she whispered, plucking at the sock, and tearing a hole in it. Oh well, she’d change it later. Closing the window with a soft click, she sat on the cold asphalt shingles. Exhaling, she shivered and snatched at the backpack, scooting her way to the edge of the roof, and the ivy-heavy trellis attached to the side porch.

She’d done this a hundred times—snuck out after her parents were fast asleep—but this time was different. Her previous excursions were because she was a rebellious teenager, tired of curfews and her parents’ disapproving notions about all her friends, and what she should be doing on a Saturday night.

Now, her sneaking out seemed a bit ridiculous. She should have simply told them she was leaving and walked out the front door—but that seemed logical.

And nothing, lately, seemed logical.

By daybreak, she expected to be in Dickens—with Ben.

Breathing deep, she exhaled. Her Ben.

It was the right thing to do—for her and for Ben. She had a good head on her shoulders. She’d graduated high school with honors in May and was now a freshman in college. She was smart, and she knew what she wanted in life. She was acting in her own best interest—living her life how she wanted. What she wasn’t doing was making decisions blindly, as her father may have suggested a couple of weeks earlier.

She and Ben had thought it through.

She was ready to push herself from the nest—just not in the direction her parents wanted.

For them, college followed by law school was her future, and then a position in her dad’s law firm. They’d worked hard and had created healthy college funds for her and her older sister, Candy. That they would graduate from a university and go on to graduate school had always been the expectation.

But it wasn’t Jenny’s dream. Not law school anyway.

In time, she would get that degree. But when she did, it would be on her own dime, and in her own time, and she would study art, not law. The money her parents had saved for her college would be a nice nest egg for them. She loved her parents—it wasn’t that she didn’t. They’d been good to her growing up, if not overly protective and stricter than the parents of most of her friends. And she didn’t want to appear disrespectful at all. She just wanted to live her own life, make her own decisions.

Her father had made that impossible with his demands and ultimatums. She knew living her life to please her father was neither healthy for her, nor in her best interest. He’d basically forced her hand on the issue and her mother had gone along with him.

A letter she’d left behind explained her plans, where she was going, who she was with. She’d call them later. After.

Maybe they’d take some of that college money and do something nice for themselves. She hoped so. They rarely took time off from work to spend time together. Perhaps they could take that cruise they’ve bantered about for years.

It made her happy to think about that.

The thing she knew for certain, though, was that Penn State and a Philadelphia law firm were not her destiny.

Ben was her future, and tonight, she was going for it.

Vehicle lights rounded the corner at the end of the street. She watched as the older model red pickup truck drove slowly toward her house. Scooting toward the edge of the roof, Jenny pulled the backpack over her right shoulder and slipped over the side to climb down the trellis.

Her stomach erupted in a tumble of nervous and happy butterflies.

Ben stopped his truck at the end of her driveway, lights off, the engine running.

She reached the ground and ran toward the truck.

Home for Christmas is now available for preorder.
Grab yours today! 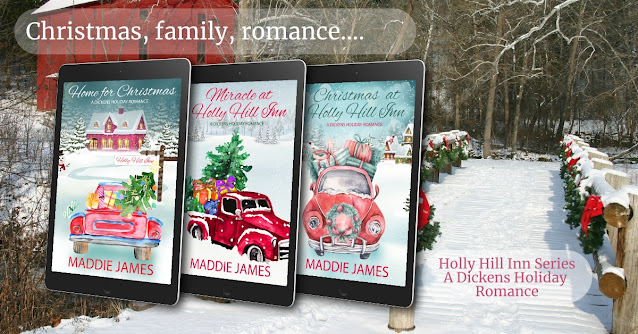